Well, haven’t I been a sad little vegimite since I arrived at my hostel in Kenmare on Sunday 24th. A few hours after I checked in my back started seizing up. Some kind of muscle spasm I think but I couldn’t move anymore and was in agony. Voltaren tablets and cream but no better by Monday. That’s the time you really miss the physical presence of friends and Phil my osteopath. And a telephone would be handy. The hostel owners don’t live on site, so I dragged myself to the kitchen and left a note on the table for someone to please come and see me. Didn’t sleep all night for pain. Eventually around 9am 2 American travellers knocked and went to the chemist for me for stronger painkillers, found out where the nearest doctor is and brought me some food and coffee, so I could take more drugs. Someone else helped me cancel my next destinations and man!, I had a ticket for Skellig Island for Tuesday, which was such a rare find due to someone cancelling. The island is another UNESCO World Heritage site and has a Christian Monestry on it built around 6th to 8th Century. Boat trips to the island are totally booked out during July/August, since the last ‘Star Wars’ was filmed there. When you land there by boat you have to start climbing up 600 or 700 stairs for starters.

And this is where the monks lived. Can you get more spartan? Monestry was abandoned in 12th century. 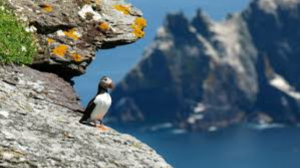 And then these cute little fellows, puffins. It’s a very special place. Those monks thought it was a bit busy on the mainland and withdrew to the island with nothing on it! Anyway, won’t go on about it, just thought I lighten up this dreary email with some google photos. But I also have the philosophy that we never know why some things don’t eventuate.

My new found friends Lainey and Rita from the B&B Bellatrix where I stayed during the retreat invited me back to their place to be cared for and recover. I was moved to tears, and ummed and ahhed if I should accept the offer. They are busy people and it’s high season in their business. I had to leave the hostel today, Wednesday, due to it being booked out. So, I thought, ich beisse in den sauren Apfel, der ja eigentlich suess ist (jump over myself basically) and accept. Receiving is not my strongest point, but it might be time to get better at it. They are very straight forward people and wouldn’t offer if they didn’t mean it. And I confirmed probably 5x if they’re really really REALLY sure. So, today after another accupunture treatment, I took a taxi back to Bellatrix. Bus and carrying pack would not have been possible. Who would have thought I’d be back there and the little town of Castletownbere starts to feel like home! Well…

It’s hard to take photos of that town, there are always cars in the way.

So, I rested, read, had more acupunture and felt guilty while Rita and Lainey rushed around working like crazy. Tomorrow 30.7.16 I have to leave because they are getting another group of 8 German walkers, have a wedding to go to and family coming on top of that. Walking is actually good, slowly and without pack, it’s bending, lifting, rolling over in bed that is an issue. But much improved already…..I think I will pull through yet again! Everybody talks about a laser treatment clinic in Dublin that claims huge successes for bad backs. I emailed them, but no appointment till end of October. Hmmm. So meanwhile I take time to smell the roses.

31.7.16 Arrived in lovely Dingle on the Dingle peninsula and it’s a Public Holiday tomorrow, so it’s quite crowded. But the weather is just horrible, bucketing down and I feel for the locals and Irish tourists too, who have a day off and this crap. John, the lovely owner of my B&B gave me tour around the peninsula, but clouds were so low, you could hardly see anything of the pretty scenery.

The Dingle Way walk is also called the Kerry Camino I think with pilgrims as sign posts. Cute. But I’m taking it easy at present and gave my Dingle walking guide away. I don’t envy the soaked walkers and cyclists who arrive in the afternoons.

I’ll spare you more photos of low hanging clouds and give you a bit of Jesus and Maria instead.

2.8.16 Today, as one has to do SOMETHING regardless of the rain, I took a boat trip to Blasket Island. Mick Sheehan from Eco Tours was the only boat that went out and braved the weather and I was sure I took my seasick tablets! We were only 5 guests, so it was almost like a private tour. And what a great rewarding trip it was! Blasket Island has such interesting history. In 1953 all remaining residents, mainly old people as the young ones had left already, were moved off the island and you see all those old ruins there. And then on the beach, what looked like rocks from the distance, were actually choc o bloc full of seals. Their howling sounds in partly misty weather was quite eerie.

This was were we landed in a little dingy from that boat you see.

100s of seals along the entire beach.

They are so funny how they seem to be nosy and poke their heads out of the water and look at you closely. We met some heritage research people on the island. The plan is to restore one or two of those houses to their old glory as a museums. 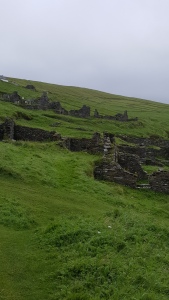 And then on the way back we were rewarded with huge amounts of dolphins swimming and jumping around our boat. That was so amazing and thrilling, holding onto the railing tightly in totally rough sea to point of white knuckles. And I think all that movement on the boat was really good for my back. Something has loosened and I’m almost back to baseline! Maybe the dolphins???? No, no, won’t get too cosmic here!

4.8.16 Moved on to Inisheer, the smallest of the 3 Aran Islands. What a place! I’ve never seen so many rocks before, it’s like a sort of moonscape in places. I love it, it is SO beautiful. 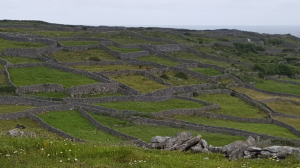 All 3 islands are supposed to have about 4800kms of dry stone walls. Sounds unbelievable really. 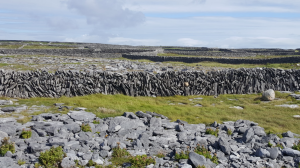 Beautiful sculpture amongst all the rocks, in memory of people who drowned at sea. I had met my Strayan (notice correct spelling Carly) friends again, Vince and Lisa, in Dingle, and we watched a movie together called “My name is Emily”, lovely Irish film. It was mentioned twice in that film that there is some sadness about Ireland and its people and it really stuck with me. I feel it, I don’t know what it is. Maybe the empty ruin houses all over the country, many from the potato famine in 1840. 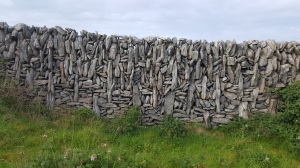 I know I know, I’ve gone a bit overboard with rock shots, but I love ’em so.

My friend Jan asked me the other day if my travels are fullfilling all my dreams. Interesting question. I almost don’t feel like I’m travelling. I feel like a citizen of this world in some way, at home wherever I am and this is my life. Not sure if this makes sense to people.

And well, didn’t Inisheer became interesting. On the 2nd night of my 3 day/nights stay the electricity was cut to 2 of the 3 Aran islands. And it turned out to be a bigger problem than anticipated, cause a cable in the ocean was damaged. Electricity comes from the mainland. Imagine running an island in high tourist season with no ability to wash sheets/towels, make phone calls, use emails for bookings/cancelling, no lights, no hot water, no fridges, food going off some toilets you could flush etc etc. Only the shop and 1 pub/restaurant had a generator. We are so totally dependent on all this technology these days. I felt for the businesses, these are the months where they make their money for the whole winter. My B&B hosts, a young couple with a sick baby, their brandnew washing had already broken down the day before and they just kept their cool. Luckily they cooked on gas, so we could still get breakfast. They do own a generator, because Kieran makes crepes at the beach in the day from a caravan, but they couldn’t hook it up to the house, needed some adaptor or something. The island also suffers from severe water shortage. When everyone was hooked up to pipes in the 90ties, the council requested people get rid of their watertanks. And when they dug more wells they stuffed that up and salt water mixed with the ground water! Didn’t we have something similar in Australia? When you were connected to mains, water tanks became illegal? Well, Inisheer wants to be energy self sufficient by 2022. They have a lot to do in 6 years! 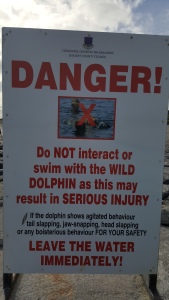 And they have a crancky dolphin at their beach!

And the famous Cliffs of Moher in the distance.

Well, since I love Ireland so much, I decided to stay a while and got myself a volunteer job through the organisation Workaway. You work 4-5 hours a day for food and accommodation. I’ll be starting in a B&B in Wicklow, South of Dublin. Apparently another beautiful tourist area. It was the first place I applied and got the job! I wish QLD Health would have ever recognised my qualities that easily!!!!!!! The owners were thrilled that someone ‘sensible’ (their words not mine!) applied, as most of their applicants seem to be 19 or 20 years old. Being appreciated for your age feels quite nice I must say! And they don’t even mind that I have a tender back. They want me in reception, meeting/greeting guests and maybe helping with breakfast. All the things I love doing. I start on the 10th and will be on my way to Dublin soon.

So, bye bye and next Blog will be from  the “River Lodge” in Wicklow.